As daily life in Canada comes to a pause, 44 per cent of Canadian households say they’ve lost work or have seen layoffs due to the COVID-19 pandemic.

That’s according to an Angus Reid survey released Wednesday, which outlines that another 18 per cent of Canadian households anticipate work loss.

Of the 44 per cent that have lost work, 66 per cent of Canadians said their employer is not paying for any lost hours. Twenty per cent said they are receiving all their regular pay, despite lost work; the remaining have some sort of pay but not full. 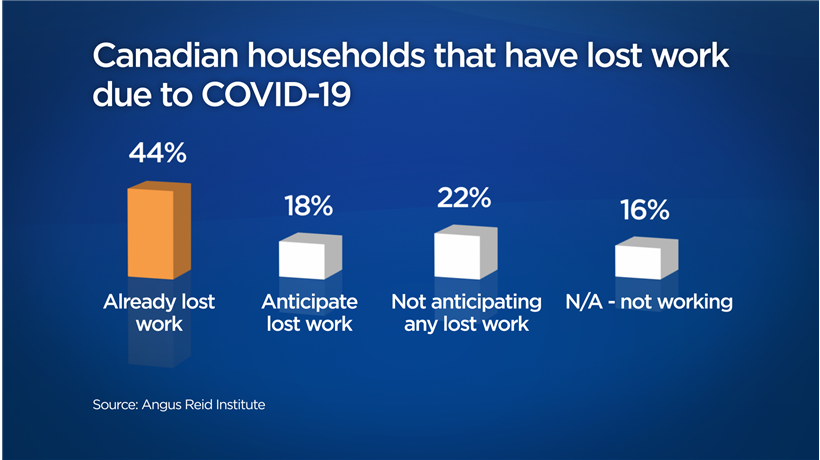 The loss of work has had a “disproportionate impact” on younger Canadians, explained Angus Reid Institute’s executive director Shachi Kurl.

The loss of work was felt fairly evenly by Canadians across different wage brackets, Kurl noted. She added many Canadians may not be losing jobs, but are scaling down work, and it will have a “ripple effect.”

“That speaks to contracts lost, cancelled projects or put on hold, clients lost,” she said.

“It’s not just about big companies, or small, closing brick and mortar locations. It has to do with marketing budgets, advertising, supply chains.”

People in every province have experienced work loss.

READ MORE:
Coronavirus — How the Trudeau government and provinces are helping renters

Saskatchewan and Manitoba saw the lowest number of job losses in the country at 37 and 32 per cent, respectively.

Layoffs have hit several Canadian sectors in the past days, with more expected in the coming weeks and months as some provinces shutter all businesses except essential services.

Thirty-seven per cent of those who have lost work said they are not equipped to handle an extra $100 in expenses over the next 30 days. One in three households also said they may miss a rent or mortgage payment this month.

READ MORE:
Coronavirus: How small businesses can apply for COVID-19 wage subsidy, and is it enough to help?

On Tuesday, Prime Minister Justin Trudeau said the government is working as fast as it can to get money to Canadians.

“We’ve put forward measures that will get money out to them quickly,” Trudeau told reporters outside his home in Ottawa, where he is in self-isolation.

“Recognize that the demand is massive across the country, and we are working very, very hard to be able to flow money to people very rapidly,” he added.

While the Trudeau government put forward a $82-billion emergency relief plan for Canadians affected by coronavirus fallout, it has faced questions about why the government is not directly sending cheques to Canadians like some other countries have promised.

“Nothing is off the table,” Trudeau said on the issue on Tuesday. “We are looking at a broad range of measures for supporting vulnerable people, for supporting businesses, small businesses specifically, and giving more help for Canadians.”

COVID-19 has produced a rapid downshift in the economy as businesses are forced to close and Canadians asked to stay home, which has led to a sharp drop in consumer spending and a sharp jump in claims for employment insurance benefits.

READ MORE:
Coronavirus: Here’s where Canada is on the curve

According to the survey, thirty-one per cent of Canadians who have lost work said they have already applied for EI, but more than half called the process “difficult.”

In addition to technical issues, personal finance expert Rubina Ahmed-Haq noted that many Canadians are also facing misinformation and confusion when trying to access government funds.

Ahmed-Haq added that many Canadians already lived paycheque-to-paycheque before this pandemic caused greater uncertainty. She said that the coronavirus pandemic is an “extreme example” of why all Canadians need to work on having savings for an emergency.

“When the virus is contained, and we go back to some sort of normal — whatever the new normal is going to be — it’s so important to start building that emergency fund.”

While the past few weeks have been difficult for many Canadians, Kurl noted there are some positives.

READ MORE:
Coronavirus: 500,000 Canadians have filed for EI this week

Nearly half Canadian households who experienced reduced work said they were “certain” they would go back to normal workloads after the pandemic is under control, while another 35 per cent were “pretty sure.” Seventeen per cent were either doubtful or thought their jobs were gone forever.

“You still have a significant level of people who think, oh yeah, I’m coming back to my job for sure. There is that optimism or hope,” Kurl said, cautioning these numbers may shift quickly.

— With files from The Canadian Press