WITH 13 HEADLINING SHOWS ACROSS CANADA 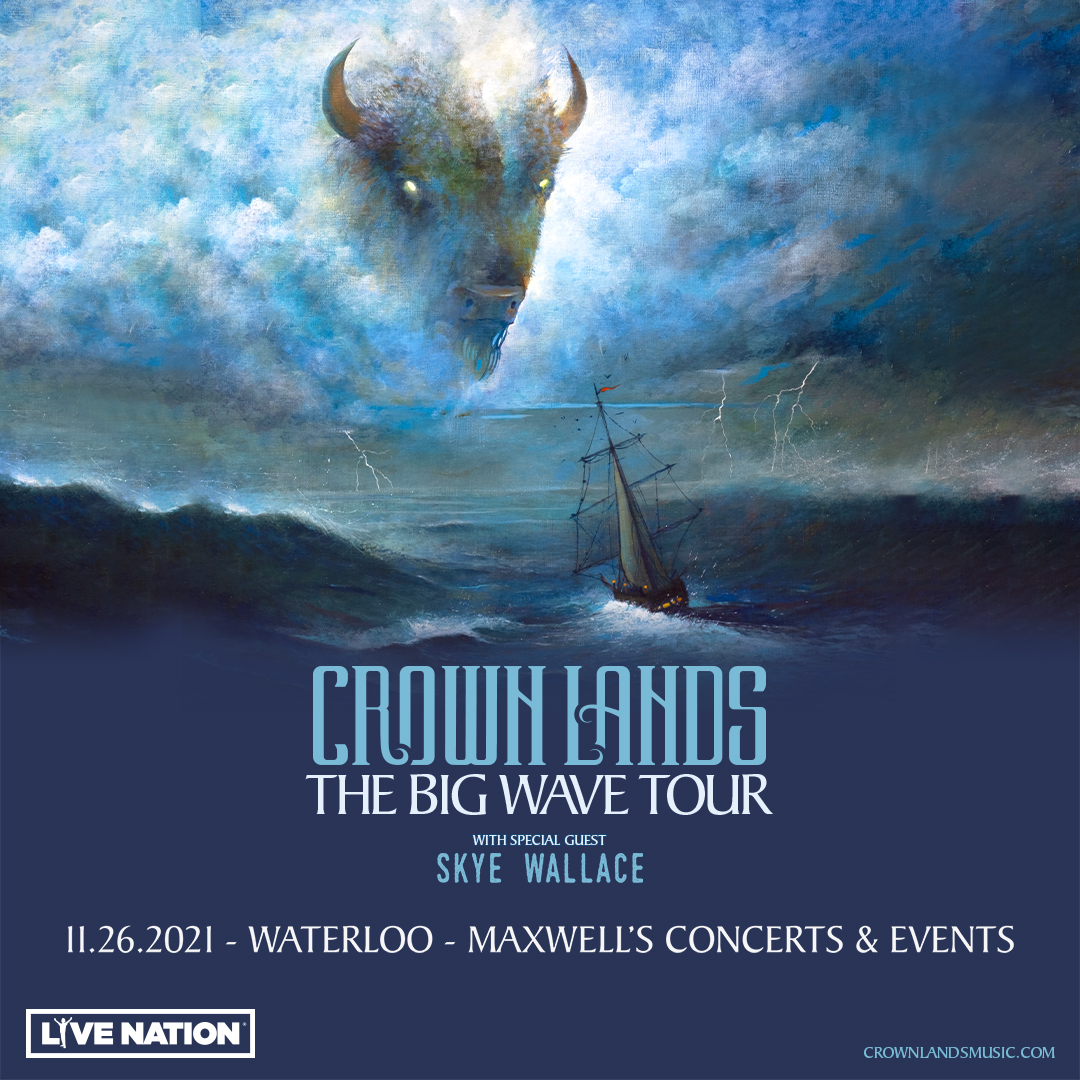 13 JULY 2021 (TORONTO, ON) –Today, Juno Award-winning, powerhouse rock duo Crown Lands – Cody Bowles (vocals and drums) and Kevin Comeau (guitar, bass, and keys) – are proud to announce, “The Big Wave Tour,” kicking off this October. The band’s first headlining tour will be a 13-date cross-Canada tour with Skye Wallace joining as support, see list of full tour dates below. Tickets will be available on Friday, July 16 at 10am local time on Crown Lands’ website, here.

Commenting on the tour announcement and returning to live shows, Crown Lands comment, “This is the biggest moment in Crown Lands history: our first headlining tour. ‘The Big Wave Tour’ takes its namesake from the opening line of White Buffalo; ‘The Big Wave has come to wash away the ancient world.’ Live music is back. We are here to push the boundaries of what two people can create together.” The band continues, “It’s been a hell of a year and we are emerging out of our musical cocoon better for it. The musicality and the production will set new bars across the board. We promise. We’re excited to have Skye Wallace as our special guest each evening. She and her band deliver true rock & roll.”

“White Buffalo” arrives as a symbol of aspiration, in recognition of the resilience and strength of Indigenous communities to overcome injustice while manifesting a prosperous future. Crown Lands explain, “’White Buffalo’ is the third instalment in our trilogy of songs about Indigenous rights,” says Crown Lands. ‘Mountain’ is what happened. ‘End of the Road’ is what is happening. White Buffalo is manifesting what will happen: overcoming oppression and rising up to reclaim one’s land. The White Buffalo is a symbol of manifestation. When Colonizers came to North America, they tried to wipe out the Buffalo to starve Indigenous people to death. The buffalo are still here. We are too, and together we’ll overcome. Also, never has 7/8 ever been more danceable.”

“White Buffalo” was released with the accompanying official music video, directed by Alim Sabir. The spirited visual sees Crown Lands immersed in the elements, performing in a new age forest with dancers that fortify the theme of movement. Watch the video for “White Buffalo” here.

Over the course of a thirteen-minute, multi-part composition, “The Oracle,” continues another story that Crown Lands is creating, revealing the origins of the Queen character featured in the “Context: Fearless Pt. 1” music video. “We wanted to take the listener somewhere and evoke a sense of adventure,” says Bowles. Taking solace from the realities Crown Lands confront in a fictional world they continue to create.

For the last year and a half, Crown Lands have introduced themselves through the release of their self-titled debut album, their acoustic EP, Wayward Flyers Volume 1, plus the four tracks so far from 2021 (“Context: Fearless Pt. 1”, “Right Way Back”, “White Buffalo” and “The Oracle”). Canadian fans now finally have a chance to see what Crown Lands do best with some up-close-and-personal live shows this fall.