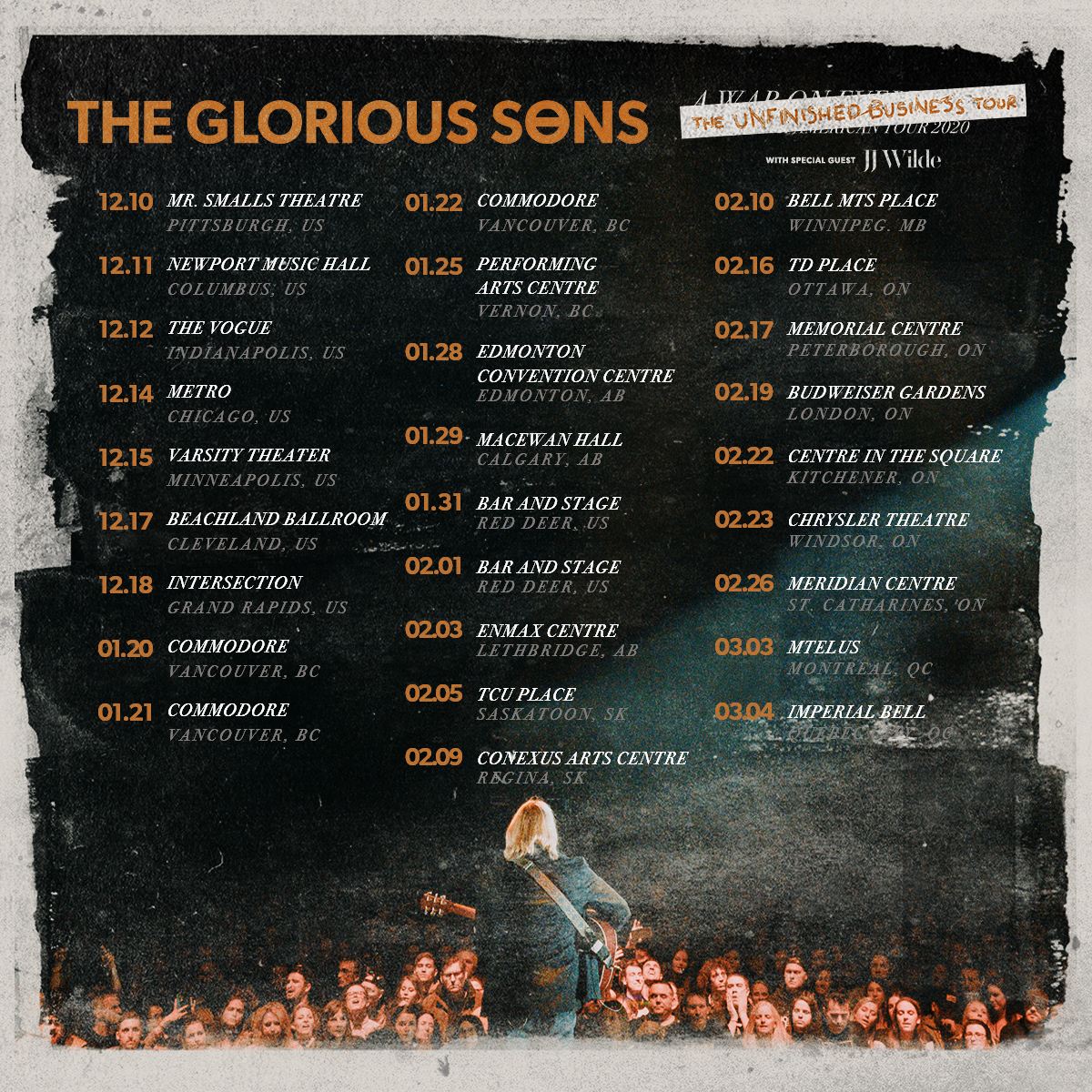 TORONTO, ON (May 27, 2021) – Following the release of their brand-new tracks ‘Daylight’ and ‘Young King’ two-time JUNO Award-winning rock band The Glorious Sons have announced The Unfinished Business Tour, set to kick off December 2021.

Beginning December 10 in Pittsburgh, PA, the 29-date North American run includes three nights at the acclaimed Commodore Ballroom in Vancouver in addition to dates in Chicago, Minneapolis, Ottawa, Montreal and Quebec City among others. The TGS Union presale begins on June 1 at 1pm ET, followed by the Spotify Fan First presale on June 2 at 10am local. The general public on sale is confirmed for June 4 at 10am local time.

Over recent months, the two-time JUNO Award winning group have been promoting an exclusive, limited edition poster series via the TGS Union mobile app. This series has been animated and each poster has been offered as a 1 of 1 minted NFT offer that includes a pair of ’season passes’ to all TGS shows in 2022, with 15 packages available in total. With the tour announcement, The Glorious Sons are offering a 1 of 1 version of all of the animated posters that includes a lifetime pair of tickets to any TGS show. The bidding on these items will be conducted via Rarible.com beginning at 1pm ET on May 27 and will be open for two weeks.

2021 looks to be the year of The Glorious Sons as they share a second new track this week with ‘Young King’.  Additionally, ‘Daylight’ received its world premiere broadcast debut on Saturday (5/22) during NBC and Sportsnet’s coverage of the NHL Stanley Cup.

ABOUT THE GLORIOUS SONS: For JUNO Award winning, two-time CRIA Platinum-certified and six-time CRIA Gold-certified rock group The Glorious Sons, the past few years have been an incredible journey, leading to the meteoric rise of their recognition as one of the commanding forces in rock ‘n’ roll, not only at home but globally. “S.O.S. (Sawed Off Shotgun)”, the final single released from their JUNO Award winning 2017 album “Young Beauties and Fools” not only reached the #1 spot at U.S. Mainstream Rock for four consecutive weeks but was the #1 most played song at U.S. Rock radio and most played CanCon song at Canadian Rock Radio for 2019, in addition to holding the #1 spot at Active Rock in Canada for 10 consecutive weeks and spending a record setting 64 weeks on the Canadian Rock Radio Chart. Their third full length studio album “A War On Everything”, named one of (Classic Rock UK’s) Albums of the Year, saw international acclaim as the lead single “Panic Attack”, became their second consecutive U.S. #1, also climbing to the top of the charts at home, where it spent an impressive ten consecutive weeks at #1, along with the album’s second single “Kingdom In My Heart” that notched the band their third consecutive #1 and 12th consecutive Top 10 radio hit in Canada. Dominating airwaves since the release of their 2015 debut “The Union”, The Glorious Sons have amassed a catalogue of lyrically driven, unpredictable thought provoking anthems for the socially conscious, that resonate with fans and wield their signature energy and spirit, complemented by jarring theatrical delivery and a mesmerizing live show. From headlining clubs to arenas and festival dates, from playing tiny rooms to massive shows with The Rolling Stones, Twenty-One Pilots and touring across the U.S. with The Struts, and from growing up in Kingston to headlining a hometown show at Richardson Memorial Stadium attended by over 14,000 of their biggest fans, The Glorious Sons have steadily cemented their position as “Canada’s Best Export” (Washington Times). 2020, kicked off with multiple sold out dates on the North American “A War On Everything” headline tour before the world shut down. Currently nominated for a 2021 JUNO Award for Group of the Year – expect the unexpected as the The Glorious Sons return to the studio to do what ‘they’ love best.